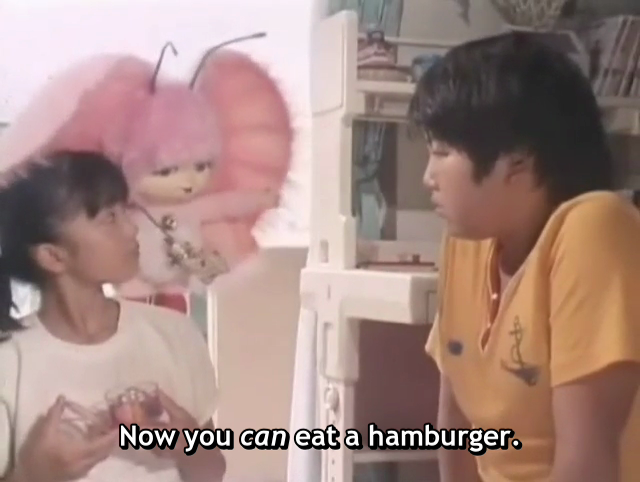 Time to kick off Confuse-Your-Friends Day with another Nemurin episode. Get it from Nyaa or Mega.

The last time I posted one of these for April Fools, I wrote an elaborate explanation about how I was dropping all of my projects to focus on subtitling Nemurin. Of course I deleted this before posting, because A) I’m too old for that sort of nonsense, and B) teh interwebs “b” crazee. This time I came up with the following NOT REAL post title:

Which I then followed up with the explanation:

I would like to announce that TSHS will be shutting down the same day my cardiovascular system does, which hopefully will not be for another 20 years at least. I’m in this to the end.

And of course I didn’t end up posting that either, because A) I’m too old for that sort of nonsense, and B) it would be pointlessly mean to jerk around people who enjoy watching the wide and weird variety of stuff I like to subtitle. For the record, I don’t pinch people who forget to wear green on St. Patrick’s day either. But I do think Baka-BT’s prank today is kinda funny, check out their forum thread here.

I suppose you could call Shotaro Ishinomori the Stan Lee of Japan, if you were the sort of person that likes those types of comparisons. Both men created a vast number of popular characters, which have been adapted into numerous successful TV and movie projects. You know that popular “team of five superheroes” trope that’s been used in countless anime and tokusatsu shows? Ishinomori came up with that in the 1963 manga Rainbow Sentai Robin. He is the holder of the Guinness World Record for most comics published by a single author. He created the incredibly popular Kamen Rider and Super Sentai franchises for Toei in the 1970s, both of which are still thriving on Japanese television to this day. Cyborg 009, Sabu & Ichi, Kikaida, Flying Phantom Ship, Robot Detective, Inazuman, Genshi Shonen Ryu…seriously, anyone who who hasn’t seen the Ryu anime would be well advised to do so, and the entire series has been subtitled by Hokuto no Gun. In 1992 he did the manga adaptation of the popular Legend of Zelda video-games, which more recently would be translated and published in the US, becoming the highest-selling manga on Diamond’s ranking of 2015 graphic novels.

But here’s an oddity that a lot of people have never heard of: the Toei Fushigi Comedy Series, a string of 14 different shows created by Ishinomori from 1981-1993. All of these featured young protagonists, some had puppety oddball sidekicks, some were Magical Girl series, and all of them were odd beyond belief.

Dokincho! Nemurin was the fourth show in the series. It stars child actress Sayuri Uchida, who seven years later would portray Ako Hayasaka (the Blue Swallow) in Jetman. The show is about three fairies (one puppet and two suit actors) who awaken from an 800 million year nap and move in with a typical Japanese family, causing much disruption in their lives.

This episode (and a bunch of other random ones) were originally subtitled by Dead Fish Fansubs. DFF was a one-man subtitling army that appeared out of nowhere in 2010, started cranking out tons of older tokusastu shows that none of the other subtitling groups would touch, and then just as suddenly retired from subtitling to join a rock band.

Special thanks to the folks at MegaBeast Empire for all of their help with this episode. Check out their site for cool subtitled tokusatsu shows like Janperson and Juspion. They’ve also worked on lots of joint projects with our friends at Hi no Tori Fansubs, including Robot Detective (another Ishinomori creation originally subtitled by DFF), Tiger One Seven, Greenman, Andro Melos, and Godman.

Oh, and if you like to watch weird stuff on April Fool’s Day, it doesn’t get much weirder than Buddhaman, this oddball indie toku short that MBE subtitled a few months ago. Check that out here.